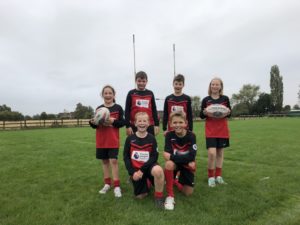 The focus was to play games that work on the development of fundamental skills of rugby, sportsmanship and having fun! As a school we improved throughout the tournament, with our passing becoming a lot quicker whilst also having the confidence to run with the ball a lot more.

Scores weren’t collated throughout the tournament, but Mr Dyson was very happy indeed with the way which our six pupils played, represented school and they thoroughly enjoyed scoring tries throughout the evening!